All tips for News Archive

The Solution to the Black and White Hats puzzle 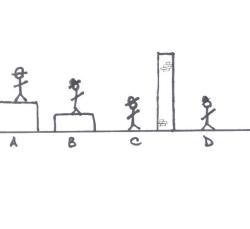 They are told that there are four hats. Two white and two black. Each man will have a hat placed on his head while blindfolded. When each man is wearing a hat the blindfolds will be removed. The prisoners will not be able to see their own hats and the only way they can work out what colour hat they are wearing will be from looking at the hats the other prisoners are wearing. All they have to do to win their freedom is for one of them to work out what colour hat he is wearing.

The prisoners are told that they have five minutes and to call out as soon as one of them thinks he knows for certain what colour hat he is wearing. But remember, if just one of them gets the answer wrong they will all have their sentences doubled.

Within the time allowed one prisoner calls out the right answer. Can you guess which one, what colour hat he is wearing and how he knew for sure?

Solution: After waiting about four minutes prisoner B calls out the right answer. He can see that C is wearing a white hat. If B was wearing a white hat too then A would have seen two white hats and would have known that his hat was black. As A didn't say anything B knew that he and C must have a different colour hats on and as C's hat is white, B knew that his hat must be black.

Puzzle Corner – The Mystery of the Great PyramidAn inscription carved thousands of years ago on the stone doorway that led to the inner chamber of the Great Pyramid of Djedi promised entry to all those who could solve a simple mathematical puzzle.Click here to learn more...

Free to customersWe've got a few copies left of Festo's really useful 198-page Dictionary of Electrical Drive Technology and R+W's excellent hardbacked guide to Precision Couplings and Line Shafts that contains over 70 pages of really helpful and interesting information. Both are extremely handy reference books and well worth having on your bookshelves!Click here to learn more...